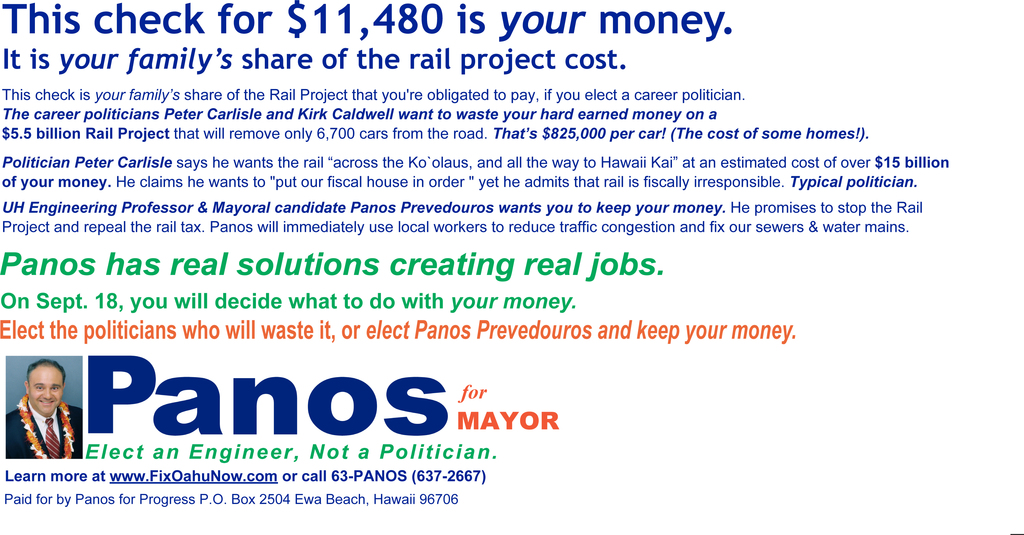 PANOS AND THE FACTS:

* Each household on Oahu will have to pay $11,480 for its share of the rail project.
* According to the EIS, we taxpayers are funding a system that will cost over $800,000 per car removed from the road.

"Many have questioned my judgment on stopping the rail project (if I am elected) despite the pro-rail charter amendment. My point from the beginning has been that if the Hannemann Administration included the above facts in its $6 million pro-rail propaganda campaign in 2008 only a tiny minority would have still voted in favor of the project.

"This September, voters will once again have the opportunity to make their voices heard. They can decide to spend $11,480 of their own money on a project that will cost over $800,000 for every car removed from the road, or they can implement real traffic solutions that will reduce 30 times more congestion than rail for nearly zero cost to Hawaii's taxpayer.

"The politicians plan to waste the taxpayer's money. I will repeal the rail tax and let the taxpayers to keep their money. The choice between electing a politician or an engineer couldn't be clearer."

The cost to households: