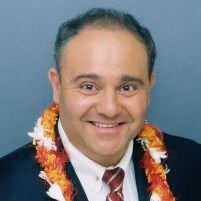 Panos Prevedouros has not received any gifts yet

About Panos Prevedouros
The first thing you want to know about someone who is running for Mayor of your city is whether he is qualified. Panos is qualified.
Here’s Why:

Panos is an engineer who has lived in Hawaii for nineteen years.

He’s done it before.

Since its opening before the 2004 summer Olympics in Athens, Panos has been assisting the Attica Toll way Operations Authority with freeway operations analysis to optimize its traffic flow. Attica Toll way was built between 1998 and 2004 in the dense periphery of Athens, Greece.

Athens is a metropolitan area of five million people. Attica Toll way’s length is longer than the H-1, H-2 and H-3 combined. It was built as a public private partnership with Greek, French and American partners with co-financing by the European Union. In 2006 it received the International Road Federation award as one of the safest freeways in the world. It was forecasted that in 2008 Attica Toll way will have about 250,000 daily entries, but the most recent count is 330,000 entries.

A wide corridor in Athens has been decongested and motorists have the option to pay a 2.7 euro flat toll and drive 15 miles in 15 minutes, or they can use parallel free arterials and make the same trip in 40 to 50 minutes.

Now that you know he can do it, here’s some background on Panos:

Like most of us, he was not born in Hawaii. Like many of our parents, he is a first generation American. He is a naturalized U.S. Citizen. (He was born in Patras, Greece, in )1961

Like at least 50% of us, Panos is divorced from his first wife. That happened in 2005, after 13 years of marriage with a local Japanese-American. They are still friends.

Like many of us, Panos fell in love again, and he and his fiancée Katie – a Kahuku born Radford grad – are expecting a baby boy in September.

Engineering is in his blood
Unlike most of us, Panos’ family is crazy about engineering. His family includes computer engineers, electrical engineers, architects, civil engineers and a mechanical engineer.

Education
Like most of us, Panos went to public school all his life.

He studied at the engineering college at AristotleUniversity, and came to the United States where he received both his Masters and Doctorate degrees in transportation engineering at NorthwesternUniversity. Northwestern, by the way, is one of the top ten engineering schools in the world.

Panos joined the Civil Engineering Department at the University of Hawaii in 1990. He is a tenured professor. He has been the Chair of UH’s civil engineering Graduate Program since 2003. He developed UH’s Traffic and Transportation Lab in the late 1990s.

Who listens to Panos?
Panos is considered to be one of the preeminent authorities in his field. Over the past ten years, he has been invited to give his professional opinion in ten countries and 33 large cities worldwide, including Beijing, Chicago, Houston, Las Vegas, Los Angeles, London, Munich, New York, Paris, San Diego, Tokyo, Venice, Vienna and Washington, D.C.

Panos: Not the Status Quo. -- Rail is not a legal system to build, yet. It has not finished the NEPA process.

We will be campaigning for Mayor of Honolulu when the position becomes vacant.

We will be campaigning for Mayor of Honolulu when the position becomes vacant. This is a winner takes all race. With your help, we can win this race! And then we can stop waste, stop the elevated rail and fix Oahu.

We are more committed than ever to repairing and maintaining Oahu’s aging infrastructure, increasing efficiency in all city departments and finding real solutions for the problems faced by the city. People want tax and traffic relief and fiscally responsible projects that… Continue

Kaunaloa said…
Panos, I saw the following sign at Makiki district park as I drove by -- "Mayoral Candidate Forum -- Thursday 9/18, 7:30 p.m." Are you planning to attend this?

Panos Prevedouros said…
Please note that the copyright to all contributed content is held by its owner.

YOUR BADGE IS ON MY MYSPACE PROFILE ALREADY.

THANK YOU SO MUCH DOING THIS!!!